A pregnant mother who was subjected to a stabbing frenzy by the father of her unborn son has revealed how she survived the harrowing ordeal.

Kayla Witek, from Melbourne, was 18 when her ex-boyfriend John* knifed her nine times and made her fall down the stairs.

The father-to-be broke into Ms Witek’s parents’ home where she was living and plunged the knife into her stomach, head, back and chest.

‘He grabbed me so quickly,’ she told FEMAIL. ‘He just started stabbing me in the back. I didn’t feel anything and I had no idea what was going on.’

Ms Witek was left with serious injuries including a broken back, ribs and a punctured lung – but miraculously survived thanks to the heroic actions of her sister. 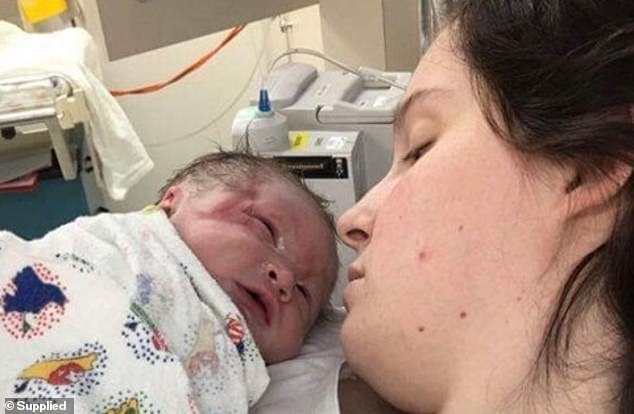 Kayla Witek (pictured left with her son, Ariel) was 18-years-old when her ex-partner broke into her parents’ home where she was living and stabbed her nine times

‘I fell down the stairs and then he just kept on stabbing me, that’s when I started feeling it,’ she said.

‘I started screaming and that’s when my sister came.’

Ms Witek’s life and that of her son, now aged three, was saved thanks to the actions of Natile (Tilly) who put her life on the line to defend her.

She recalled how Tilly dragged her into another room to try to get her away from John while desperately fending him off.

‘I put my hand on my back and that’s when I saw I had blood on my hands and still remember my sister and her friend putting pressure on my chest to stop the bleeding,’ Ms Witek said.

While the 18-year-old was worried for her survival, she’d also feared her unborn child had been harmed during the attack because she couldn’t feel him move. 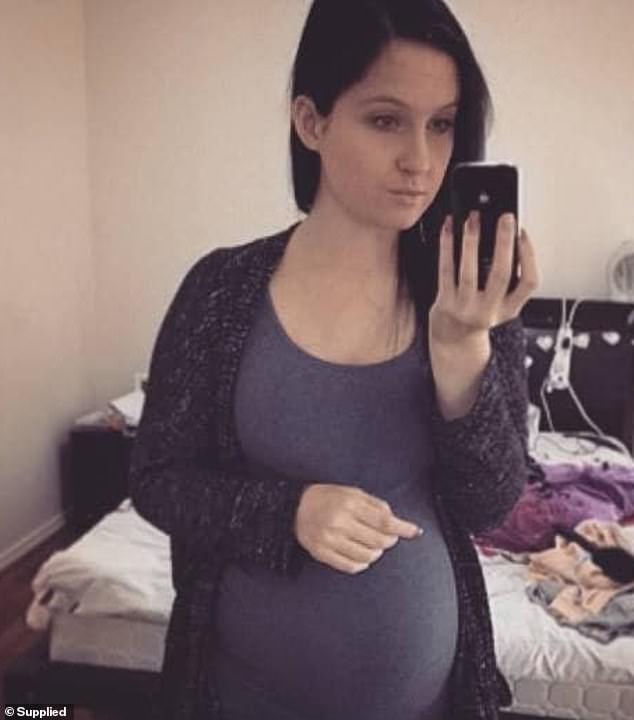 Ms Witek (after the attack and before the birth of her son) said while feared for her survival during the attack, she was even more worried about her then-unborn son

Because she struggled to maintain consciousness, Ms Witek can only vaguely recall what happened next.

She said a stretcher took her to a waiting ambulance and she remembers seeing her parents’ property swarming with police and helicopters circling overhead.

Her ex-partner fled the scene and it was several hours before he was tracked down at a friend’s house where he was alleged to have been hiding.

Inside the horrific reality of domestic violence in Australia:

* On average, one woman a week is murdered by her current or former partner

After Ms Witek was admitted to Royal Melbourne Hospital, the extent of her injuries were revealed.

But she said the hardest part was then having to spend 24 fearful hours after the attack worrying whether her unborn son had survived.

‘I had no idea what was going on,’ she said.

Much to her relief it doctors eventually confirmed her baby was fine and that he hadn’t been harmed. 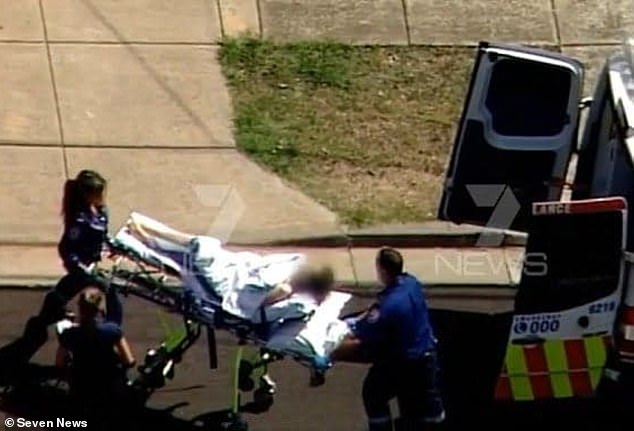 While events of that day are hazy due to the trauma she experienced, Ms Witek said she remembers being taken out of the house on a stretcher to a waiting ambulance

Ms Witek was in the hospital for two weeks recovering before she was discharged.

She then spent months in meetings with lawyers preparing for a trial.

In September 2016, John appeared in court on charges of attempted murder, however, his conviction was downgraded to intentionally causing serious harm.

He was given a jail sentence of just 18 months and because he is not an Australian citizen he is now awaiting deportation to his home country in the Middle East. 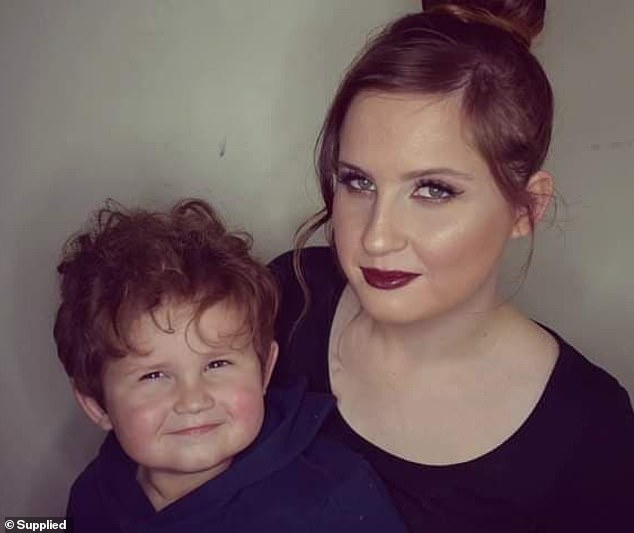 Data gathered by the Bureau of Statistics and the Australian Institute of Health and Welfare indicate that intimate partner violence is the greatest health risk factor for women aged 25 – 44 and that young women (18 – 24 years) experience significantly higher rates of physical and sexual violence than women in older age groups.

While much is known about intimate partner violence, there are data gaps in some areas that do need to be filled to create a more complete picture.

Ms Witek revealed she first met John through friends shortly after she moving to Sydney.

The pair took things slowly, taking weeks to get to know each other before returning to Melbourne so Ms Witek could get to know John’s family.

Then the unthinkable happened.

‘He took my sim card from my phone. He started calling my friends, telling them I’d been sleeping around,’ she said.

‘Then he took control of my finances and basically locked me in the house.’

Things were made worse by the fact John’s mother did not attempt to help her, even telling her at one point to make sure she wore make up and dressed up ‘to look nice for her man’.

Ms Witek recalled John was frequently violent toward her during this period, not only hitting her but also forcing her to have sex. 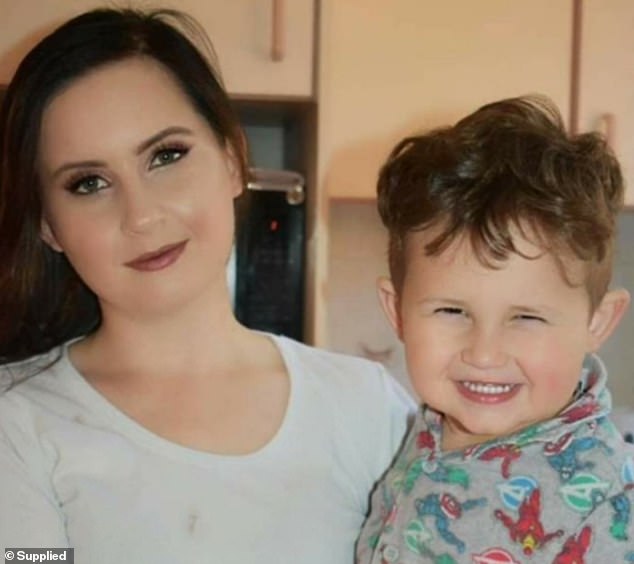 As well as being held against her will, Ms Witek said her ex-partner controlled her finances as well who she spoke to

Despite multiple attempts to run away, she said her ex-partner always found her and dragged her back to his parents’ home again.

Then she discovered she was pregnant – and in a rare moment of generosity, John allowed her to call her family to share the news.

Their happiness didn’t last, however, and before long her ex’s controlling and abusive behaviour became worse.

I couldn’t have a shower without his mum watching me. I couldn’t even go to the bathroom on my own

‘I couldn’t have a shower without his mum watching me. I couldn’t even go to the bathroom on my own,’ she said.

After suffering the ordeal of living with John for five months, Ms Witek was able to make a break for freedom and return to her parents’ home.

Two months later, she said her ex tracked her down, forcing her to take out an apprehended violence order (AVO).

Then, one morning in March 2016, when she was three months pregnant, she said John started texting and calling non-stop.

She called the police and was told they’d call her back.

Moments later, Ms Witek said a ‘shadowy figure’ appeared outside, and before she knew it she was desperately trying to defend herself against her knife-wielding ex. 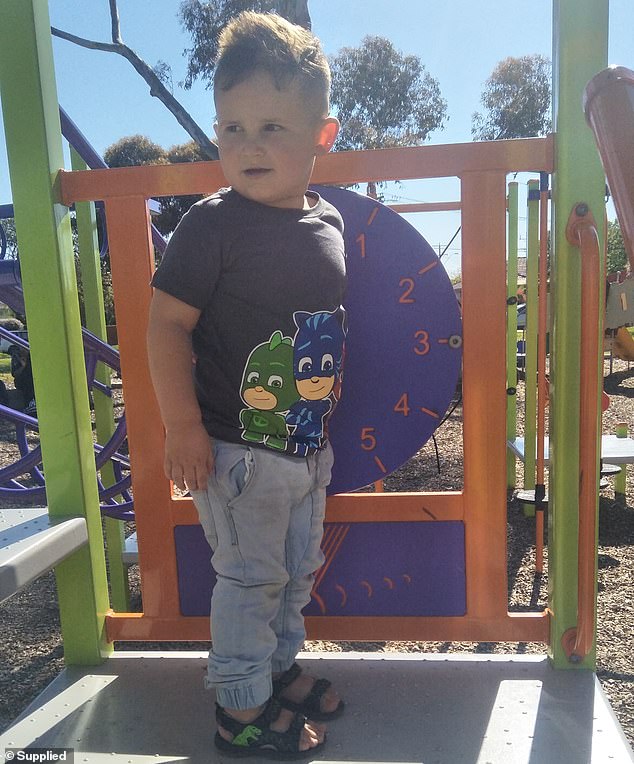 A new start: Ms Witek and her son Ariel, now aged three, have moved interstate and are slowly rebuilding their lives

It’s now been three years since the attack, and while the physical scars have healed, Ms Witek is still recovering from the emotional and mental impact.

The 21-year-old and her boy Ariel, now three, have since moved interstate as a way of starting anew.

Ms Witek is currently studying photography part-time and has also set up a Facebook page to support other women who’ve suffered domestic violence.

‘It’s been hard getting over it because I never thought this would happen to me,’ she said.

‘Going through this and having to start again – it’s not fair. It’s not fair on all women who have to go through something like this.’

* Names have been changed