A photo of a bizarre ‘plug-in doorbell’ has sparked an amusing debate on social media.

The discussion started when an Australian woman posted a picture of the device in popular Facebook group, Mums Who Clean.

‘Not really a cleaning question, but I just moved into a house and was wondering if anyone knows what this is?’ she asked.

It appears to be a Syneco wireless door chime, which was previously available at Bunnings but is now out of stock.

The device plugs into a socket and converts the traditional doorbell sound to a choice of seven chimes, which include a gong, a cuckoo’s call and the melody of the iconic Big Ben clock at London’s Westminster Palace. 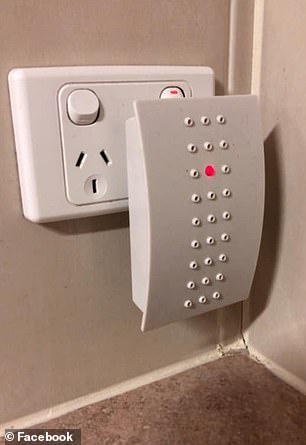 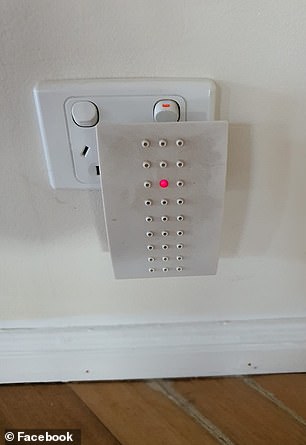 This bizarre ‘plug-in doorbell’ has sparked amusing debate on social media, with people offering very creative suggestions about what it might be

But people suggested it could be something much more interesting, with hundreds offering creative responses from sex toy chargers to electronic repellants for children, in-laws and even President Donald Trump.

‘It’s a multiplug system for vibrators….says my friend,’ one woman replied.

‘It’s a tiny switchboard. I think one of them will connect you to the butler,’ said another.

‘Turn the lights off and it shoots a red beam across like a burglar alarm… as seen on any movie where they are trying to break in,’ said a third.

A fourth said: ‘It lights up red when the mother-in-law is at the front door.’

A fifth suggested the device might be a ‘Trump-repeller’, in reference to the divisive US President, to which another replied: ‘If only.’

‘It’s the “Continuum Transfunctioner”,’ one woman said, while someone else wrote: ‘It’s 2020 – nobody knows.’

‘It’s a child repellent. Keep those pesky little gremlins away,’ added a third.

‘Is it light-up contraceptive pills?’ a fourth wondered, referencing the comparable layout of hormonal pill packets.

Dozens said the comments had brightened their mood in a year marked by grim news and daily drudgery.

‘Oh man I laughed at some of these! Thanks ladies for the good old laugh, needed that,’ one woman wrote.