Dessert lovers are drooling over an amateur baker’s simple recipe for air-fried pavlova brownies, made from a thick layer of meringue stacked over a chocolate fudge base.

Photos of the treats have drawn dozens of delighted responses since they were shared in an Australian cookery group on Facebook late Sunday night, with many describing them as a perfect fusion of their two favourite desserts.

The brownies are made with three egg whites, two cups of sugar, one teaspoon of vinegar and salted caramel flavouring and a box of ready-mixed fudge brownie from Green’s or Betty Crocker.

The mixture should be cooked in Kmart’s new three-in-one air fryer oven, which is sold online and in stores across Australia for $129. 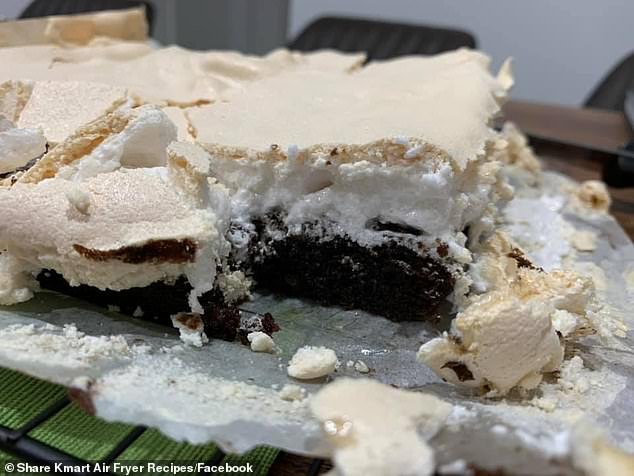 The pavlova topping is made by beating egg whites until light and fluffy, then mixing in sugar until stiff peaks form.

Next, the vinegar and salted caramel are folded in, taking care not to beat vigorously as this knocks air from the mixture which prevents it from rising.

Once the pavlova batter is ready, set to one side and air fry the brownie batter – mixed per packet instructions – for 20 minutes at 170 degrees Celsius.

The pavlova can then be loaded on top and fried for a further 20 minutes at 160 degrees Celsius – it’s that simple. 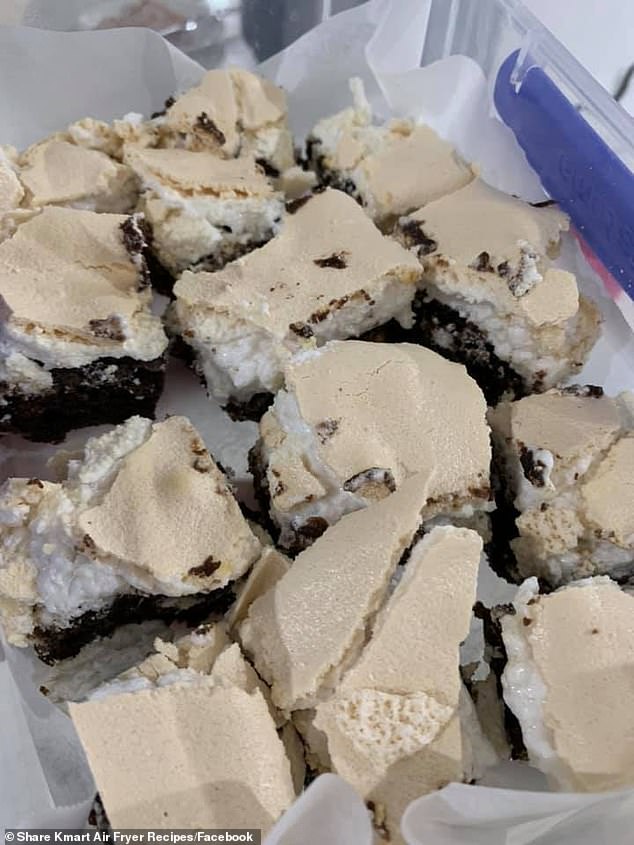 People have been praising the clever combination in the comments section, with one woman christening the invention ‘pavlownies’ – a mash-up of pavlova and brownies.

‘That looks great. I did this for my son’s 21st topped with ganache and strawberries,’ one woman said.

‘For his 18th I teamed up with my mum and made a layer of ice cream cake with fudge swirl as well as the brownie and pav.’

And it’s not the only quirky brownie-based recipe taking social media by storm in recent weeks.

1. Beat egg whites until light and fluffy, then mix in sugar until stiff peaks form.

2. Fold in vinegar and salted caramel flavouring, taking care not to beat vigorously as this knocks air from the mixture which prevents it from rising.

3. Set pavlova batter to one side and air fry the brownie batter – mixed per packet instructions – for 20 minutes at 170 degrees Celsius.

4. Load pavlova on top and fry for a further 20 minutes at 160 degrees Celsius.

The 26-year-old, who is the founder of FitWaffle Kitchen, an Instagram page dedicated to decadent desserts that take just a few minutes to prepare, has amassed over 20,000 likes on the clip.

In it, the self-taught chef shows viewers how to make a batch from five supermarket ingredients – butter, sugar, eggs, flour and cocoa powder – along with 27 bars of Kinder and a jar of the iconic chocolate and hazelnut spread.

Ms Head, who shot to online stardom when a baking craze swept the globe during the first COVID lockdown, previously shared a similar recipe – but says this version is ‘definitely an upgrade’. 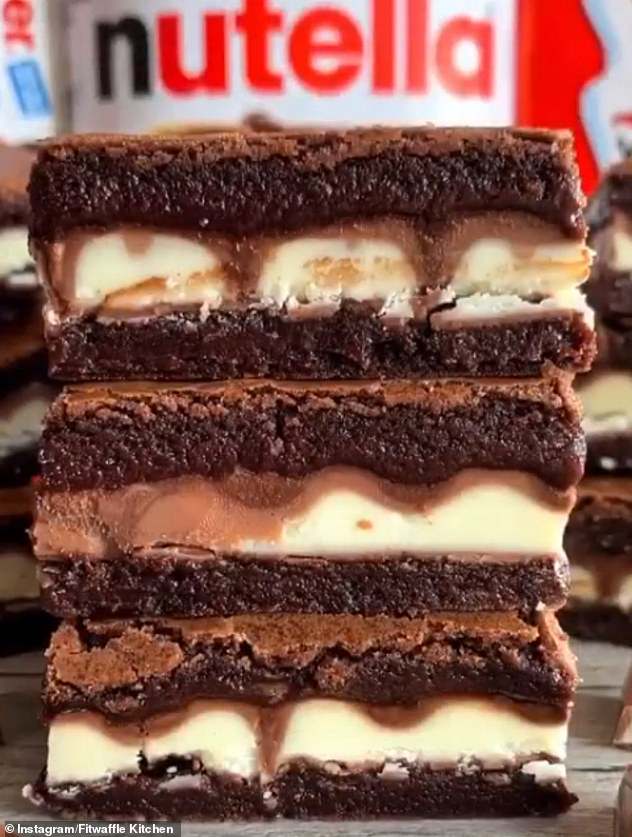 Self-taught baker Eloise Head’s Nutella and Kinder stuffed brownies, made from simple supermarket ingredients, 27 bars of the children’s chocolate and a jar of the iconic spread

She adds 125 grams of melted milk chocolate, followed by 100 grams of flour, 30 grams of cocoa powder and a teaspoon of salt, sifted through a sieve.

Once combined, she spoons half the mixture into a lined baking tray and turns her attention to the decadent filling.

She adds a layer of Kinder chocolate – 27 bars, laid out whole – and 150 grams of Nutella that’s been gently warmed in the microwave, before covering it with the second half of the brownie mix. 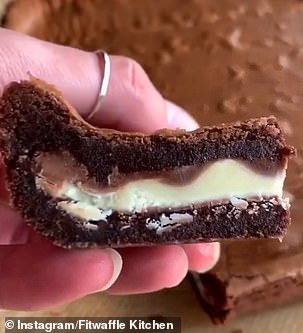 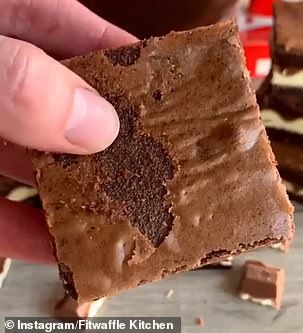 Ms Head previously shared a similar recipe, but says these brownies are ‘definitely an upgrade’

‘I would recommend adding them after it’s cooked if you don’t want the wafer to go soft in the oven,’ she said.

The dish should be baked in the oven at 170 degrees Celsius for 20 to 25 minutes and sliced into pieces once cooled.

Photos of the brownies have drawn dozens of delighted responses since they were shared online, with comments including ‘I have to make this’, ‘Oh my God’ and ‘these are next level’.

Others tagged their friends, asking them to make the brownies on their behalf.

3. Once combined, spoon half the mixture into a lined baking tray.

4. Add a layer of Kinder chocolate – 27 bars, laid out whole – and Nutella that’s been gently warmed in the microwave, then cover it with the second half of the brownie mix.