Micro-apartment living is the latest trend to emerge as inner-city dwellers seek to find a way to live with less while gaining a foothold on the property ladder.

Helping to spearhead the movement is Douglas Wan, a Melbourne-based architect who took a former nurses quarters measuring just 28sqm (301sqft) and converted it into a modern multi-functional living space.

The apartment, which is divided into ‘zones’, takes inspiration from functional social housing dating back to the 1920s and Japanese teahouses.

‘It’s about making the most out of the space without having conventional furniture, Mr Wan said on a YouTube clip for Living Big In A Tiny House Australia. 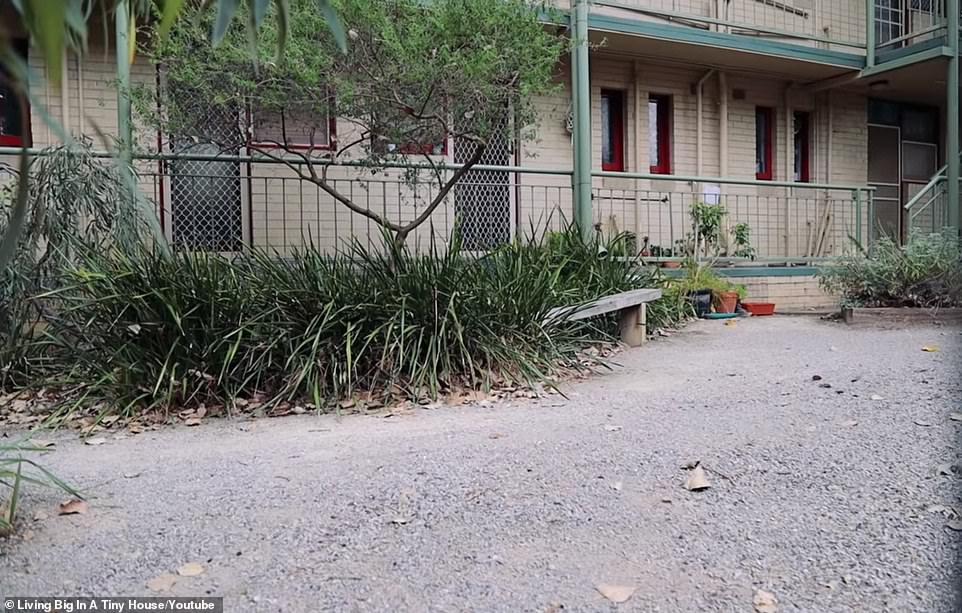 BEFORE: This complex, located in an inner-city suburb of Melbourne, was originally built as housing for nurses 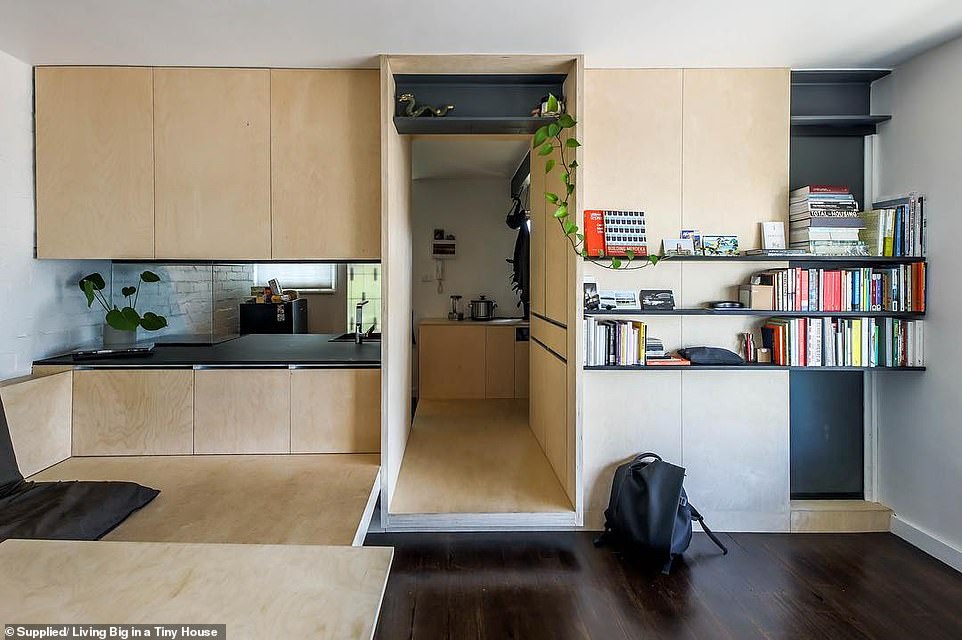 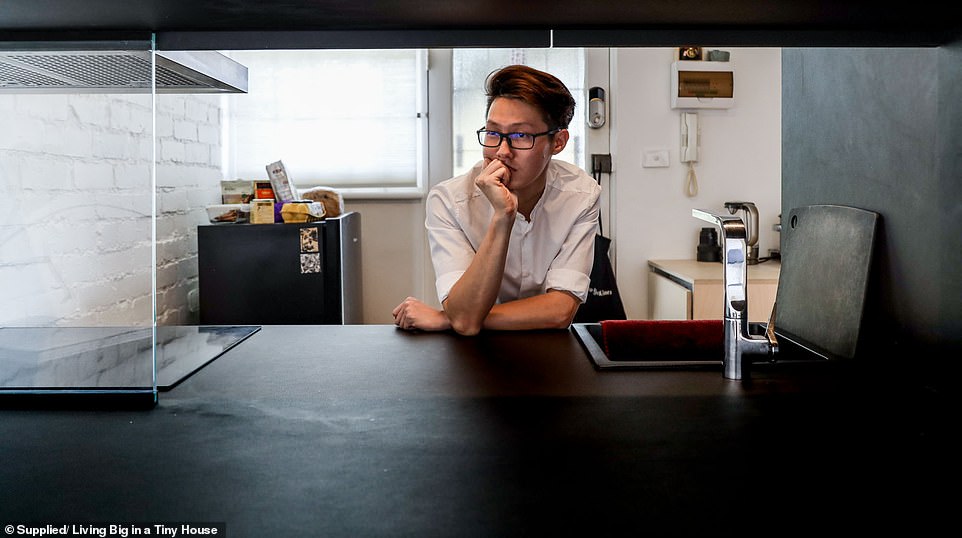 As well as drawing on these influences, Mr Wan said he wanted to infuse the space with a ‘primal instinct’.

He explained this as ‘a feeling you have of coming home to a cave that opens up to the light.

The architect said he didn’t hesitate to take back precious room from areas such as the bathroom which formerly housed a full-sized bath.

‘The kitchen should absorb a bit of that space so what I did was knock down low-bearing walls. This was to provide a clear space within the internals of the apartment,’ he said. 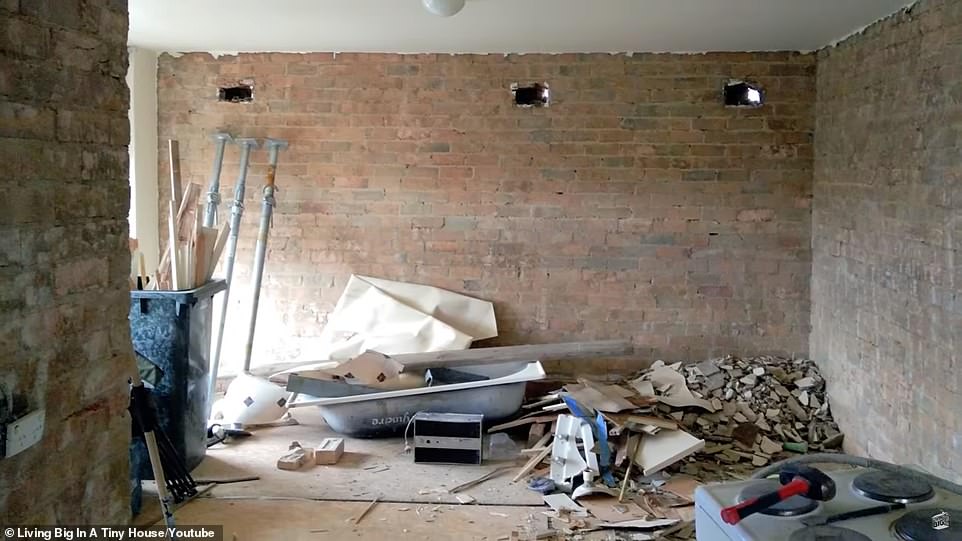 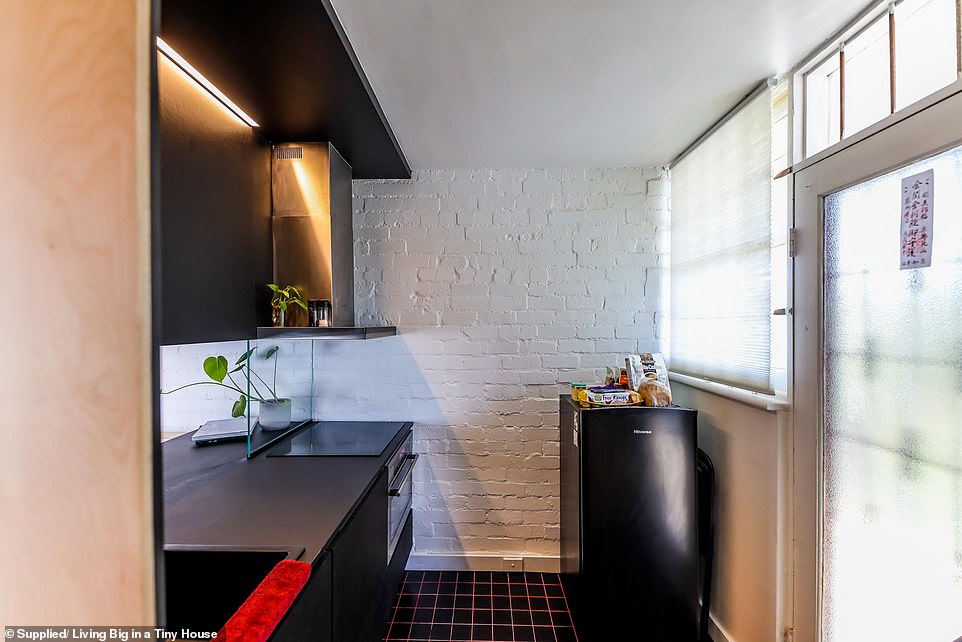 Although the kitchen measures just 1.8sqm in total, the home comes complete with a full kitchen that includes a four-burner stove, rangehood, oven, dishwasher and fridge

Overhead support was provided by using steel beams which ran the width of the apartment. The architect said this allowed him to ‘construct’ walls wherever he thought appropriate.

Aspects of the unique space sure to excite any potential tiny home dweller include a fully fitted out kitchen.

‘I found out that 1.8sqm is all you need for a kitchen. So by going deep, I found you have more than enough space for prepping food, washing vegetables and cooking.’ 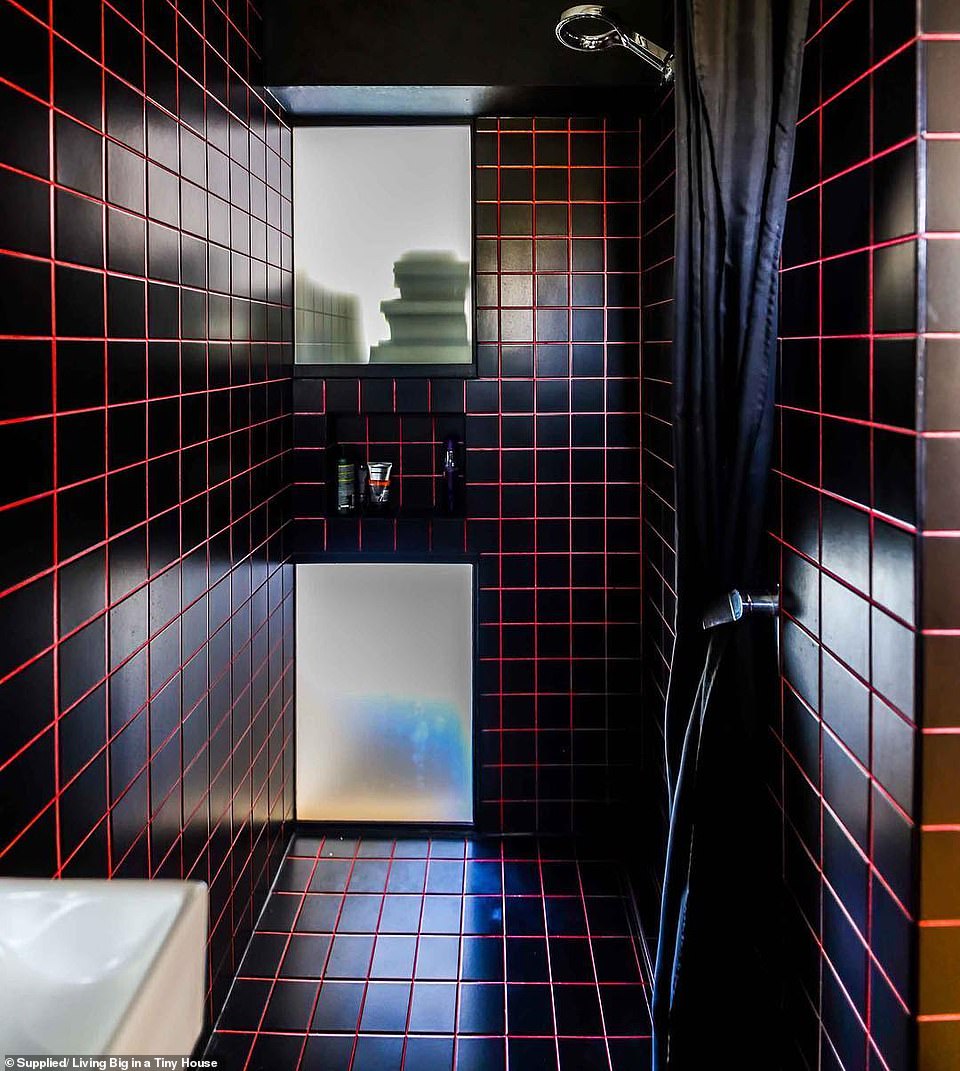 The bathroom has been tiled using black tiles and red grout, a design feature that flows on from the kitchen

As well a full-sized stove and range hood, the tiny kitchen also features a dishwasher and full-sized overhead kitchen cupboards.

The cupboards feature an interesting quirk in that they open in two directions, the kitchen and the living space.

Items used less often stored on the top shelves are easily accessed by stepping onto a platform built as part of the main living area.

In keeping with a design brief focused on spacious minimalism, the architect also revealed he’d come up with a clever solution for the kitchen’s plumbing.

He located this under raised flooring which was also home to a washer/dryer and offered a clever nook for storing shoes. 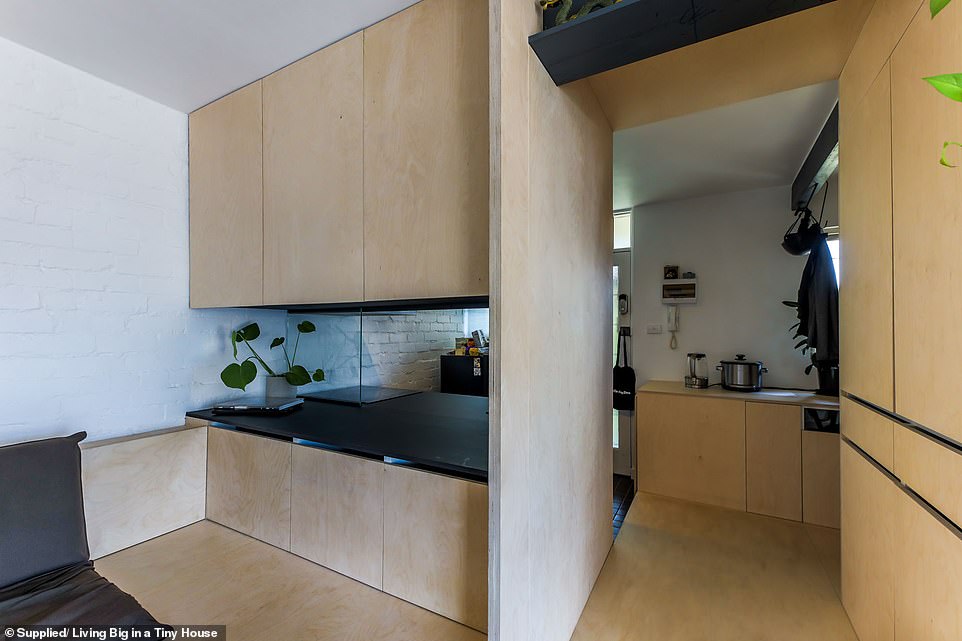 The kitchen cupboard doors open out into the kitchen as well as the main living area, a design feature that provides extra storage for items less frequently used 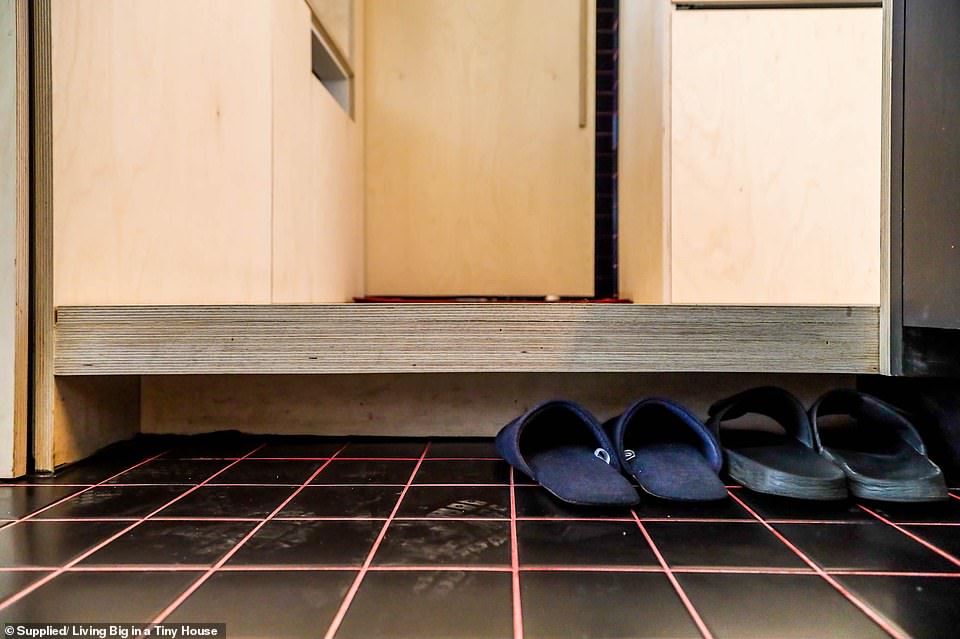 Maximising space has seen Mr Wan locate the home’s plumbing underneath this raised platform, a space which also doubles as a storage nook for shoes

Although the home is streamlined thanks to its use of plywood and overhead beams, rustic features such as original brick, painted white, have been kept.

‘High contrast is what I’m after. If I am going with texture, then I want to offset that with a smooth surface,’ Mr Wan said.

In keeping with an ultra-modern aesthetic, the kitchen and bathroom are decked out in black tiles. These are filled with red grout, a striking design accent.

‘It’s about contrast again, offsetting dark against light. It’s about texture; the plain against the smooth.’ 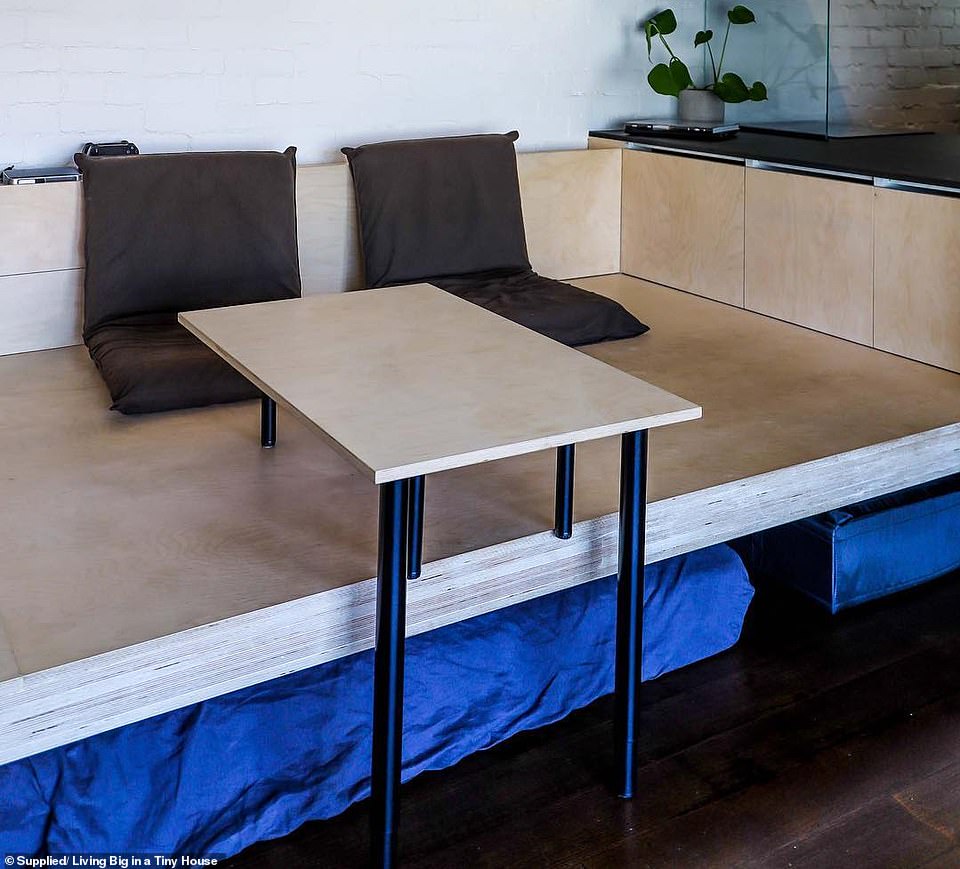 This larger raised platform runs the length of one wall and serves as a place where Mr Wan can sleep, dine or relax

The main area of the home functions as Mr Wan’s bedroom, a living area as well as a workspace.

In order to achieve this, without overburdening the room, the architect built a large raised platform which runs the length of the space.

This serves as an area for his bed and can be easily converted into seating for dining or relaxing.

‘Most of the time the bed sits on top,’ he said. ‘It’s only when I have guests that I make the space look presentable that the bed slides underneath and it becomes a clear space for people to sit on top.

‘People are like water. People are more adaptable than objects.’ 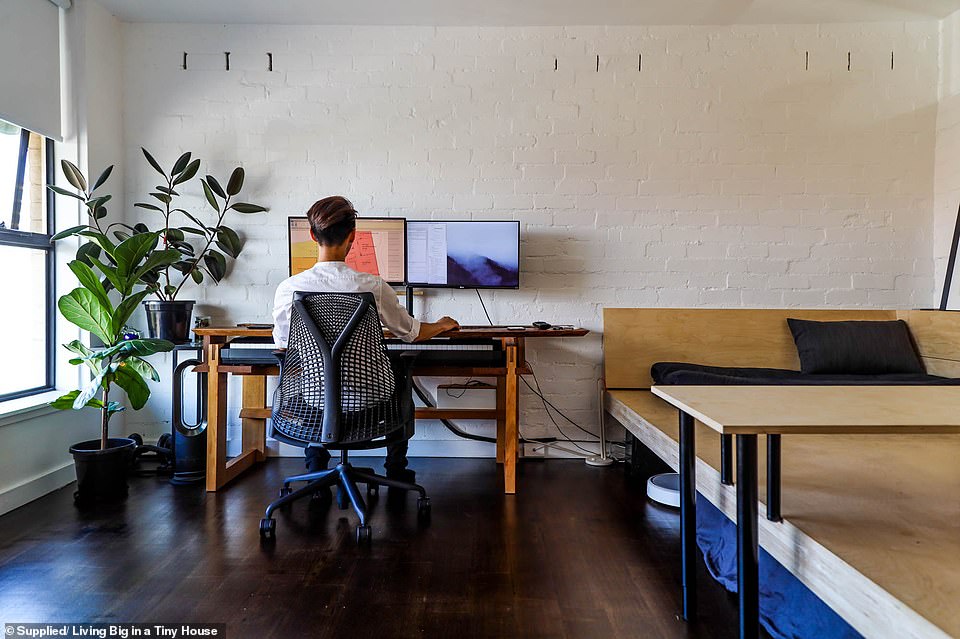 This area also functions as a work zone, a place where Mr Wan has set up a desk closest to the apartment’s windows.

‘It’s nice being able to be in the space in the mornings, feeling the sun shift throughout the day.’

The multifunctional desk was also designed by Mr Wan, something he said was part of a university project.

‘The project required us to make a functional piece of furniture that pushes the boundaries of what is practical.

The desk is made from two pieces of reclaimed wood which slides forwards when Mr Wan is working and back to reveal his keyboard. 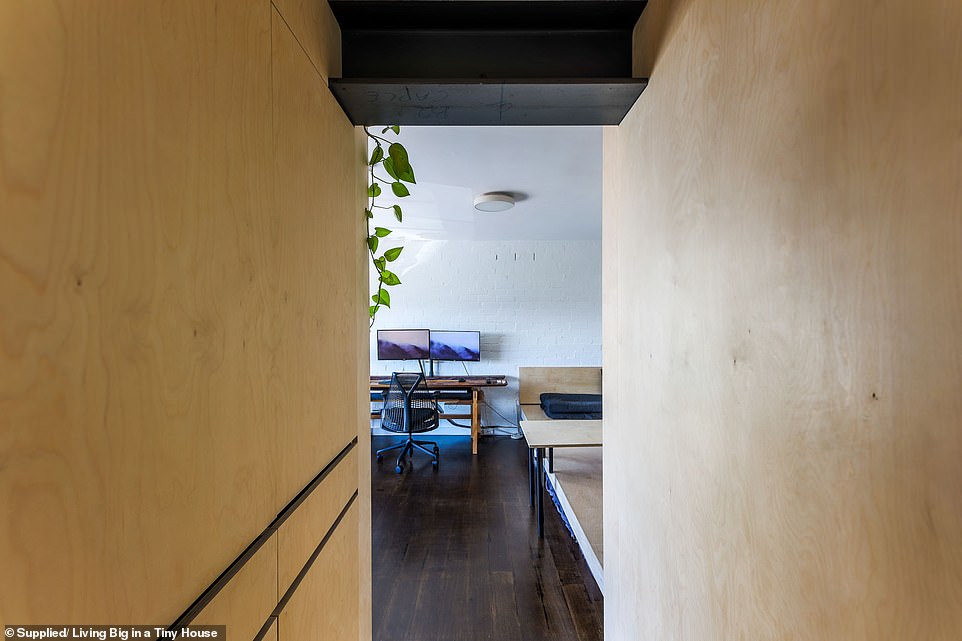 Mr Wan said his ‘simple space’ had been a joy to live in for the past year, something he credits to being easy to clean, lock up and work in

In the year Mr Wan has been living in the apartment, he said life couldn’t be easier – thanks to the fact it’s a ‘simple space’.

‘It’s about making the most out of the space without having conventional furniture.

‘It’s easy to clean, it’s easy to lock up and travel and it’s just a nice big space to work in throughout the day.’