Coronation Street moves people to poetry. This 60-year-old story of working-class families on a street in the north of England has a touch of beauty.

The cobbles, the pub, the alley running down the back of the terrace, even that cat on the roof as a mournful trumpet plays over the credits… this is as close to literary magic as TV ever gets.

Poet Sir John Betjeman certainly thought so. He was a Coronation Street fan, and lived near the show’s creator Tony Warren in London during the 70s. 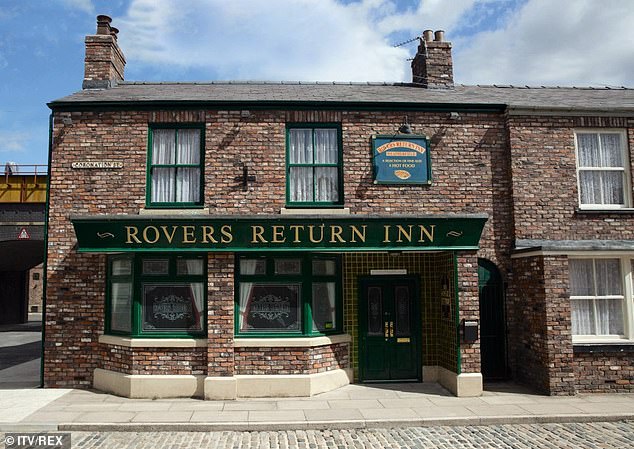 Coronation Street is celebrating its 60-year anniversary in December and to mark the occasion, Weekend have taken a look back at some of the soap’s most memorable moments

In 1974 Betjeman wrote to his friend, ‘Coronation Street, I live for it. Thank God. Half past seven tonight and I shall be in paradise.’

The soap’s first script editor Harry Kershaw recalled his excitement at reading the show’s earliest scripts. ‘You could close your eyes and see the flight of ducks, the antimacassars, the chenille tablecloths…’

Since it began airing on 9 December, 1960, Corrie has held the nation enthralled. Now, an official new book celebrates all that’s great about Britain’s favourite street… 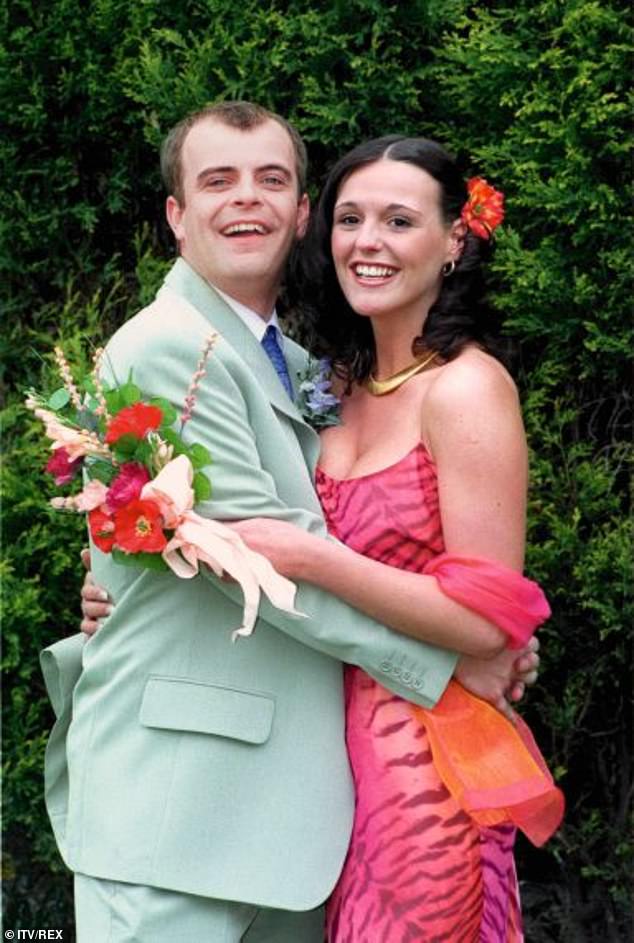 The record for marriages in Corrie is held by Steve McDonald (Simon Gregson). He’s walked down the aisle eight times in his 30 years on the show – that includes twice with Karen Phillips, twice with Tracy Barlow and twice with Becky Grainger, who was too drunk to say yes the first time.

His most tragic storyline came in 2004 when Karen (Suranne Jones, above with Simon) became pregnant – Tracy had been calling her ‘barren Karen’. But Karen had a miscarriage and, emotionally shattered, stole Tracy’s car… with her baby Amy in the back.

Karen set light to it and Tracy tried to run her over in Steve’s taxi. Baby Amy was safe, but Karen’s marriage to Steve ended.

The Rovers’ most loveable landladies 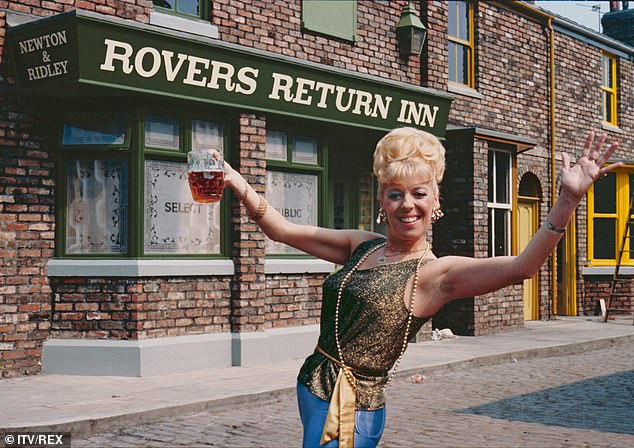 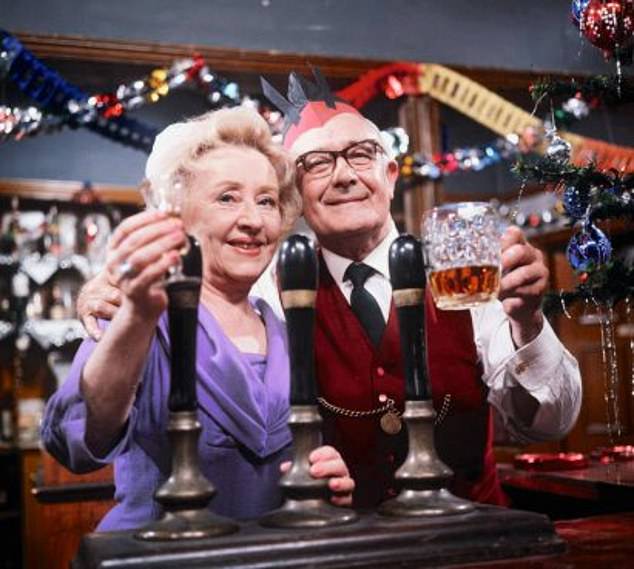 Doris Speed (left), who died in 1994 aged 95, portrayed snooty landlady and sometime mayoress of Weatherfield Annie Walker from 1960 to 1983

It’s been there since the start and is regarded as the very heart of the Street – the Rovers Return Inn (named after a pub in Manchester’s Withy Grove area). The little ‘back street boozer’ has seen more births, deaths and wedding parties than most registry offices.

Doris Speed, who died in 1994 aged 95, portrayed snooty landlady and sometime mayoress of Weatherfield Annie Walker from 1960 to 1983 so well that fans suspected she might be as snobbish in real life. In fact, she was popular among the cast and known for her sense of humour.

William Roache remembers she was a fanatical bridge player and would take on members of the cast during rest periods.

Corrie’s creator Tony Warren first wrote the part of Annie with Doris in mind – having worked with her when he was a child actor.

Among other landladies of the Rovers, none had a sharper tongue than Bet Lynch. She once scolded a cheeky young punter, ‘I’ve got tights that are older than you.’

With her bleached blonde beehive and love of leopard print, she was instantly recognisable. But beneath her wisecracking exterior she could be vulnerable to the hard knocks life sent her way.

Former factory worker Bet began her 25-year stint in the Rovers as a barmaid in 1970.

Always dressed to kill and ready to flaunt her assets – although sometimes with her dress on backwards – she went from one romantic disaster to another, memorably with factory owner Mike Baldwin, until in 1987, following a fire that nearly killed her, she married former showbiz agent Alec Gilroy (Les Dawson’s old comedy partner Roy Barraclough).

After years of sparring, the couple’s parting scene before Alec moved away in 1995 was praised for its understated poignancy.

Joanna recalls, ‘I loved her being a bit aloof and shy, and I hated having to say she longed to travel the world and not marry Ken.

‘I wanted to stay forever! I still treasure a photo of me sitting on the pavement grinning my head off.’

In 2009, there was a plan for Elaine to return, but Joanna was too busy. She says, ‘What a treat that would’ve been… me and Ken getting misty-eyed again.’

LES DENNIS: The comic played Michael Rodwell, who was six-times-married Gail Platt’s most recent husband, from 2014 until he died from a heart attack in 2016.

Les says, ‘It was a joy to join the show. On my first day, Michael burgled Gail’s house and I ran down the cobbles to his van – I was so overcome that I jumped into the crew vehicle!’

RULA LENSKA: Rula, who played Ken Barlow’s most recent partner, Claudia (right), says, ‘If anyone had said, “What’s the least likely show you can imagine yourself being cast in?” I would have said Coronation Street.

It’s set up in the north and I don’t sound right with a northern accent. But I was thrilled to be asked.’

ROY HUDD: The late comic and music hall expert Roy played undertaker Archie Shuttleworth from 2002 to 2010. ‘My wife is the show’s greatest fan,’ he said.

‘When I got the job you’d have thought I’d been made prime minister! The writer Daran Little created a lovely running gag: when I met anyone, I’d look at them and say, “Five foot eight, I’m not wrong, am I?”’ 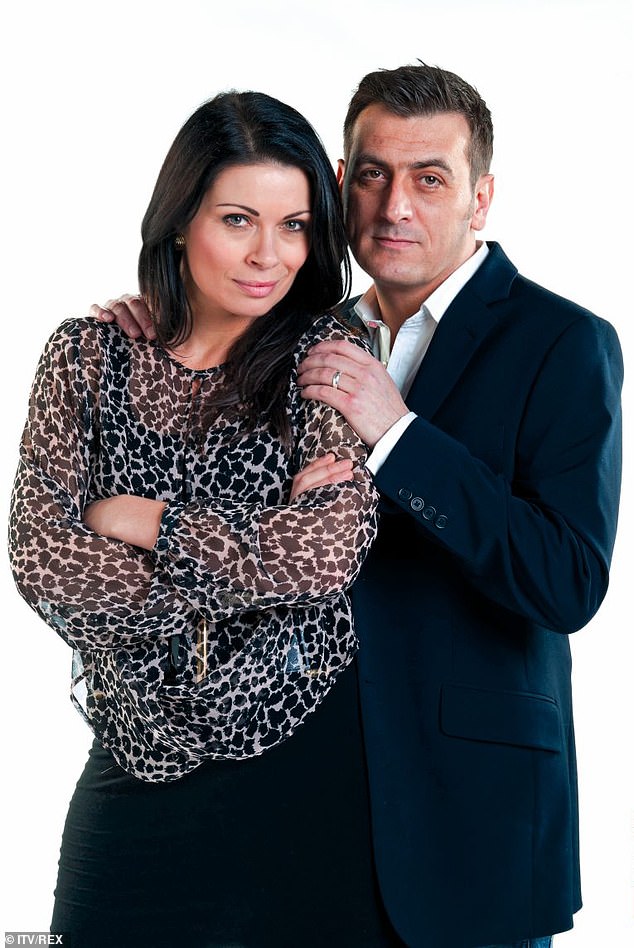 Carla Connor (left), played by Alison King, has experienced a lot of trauma in the show, including her husband dying in a car crash, rape, kidney failure and psychosis

First there was temptress Elsie Tanner and her chequered love life.

Now that role is filled by Carla Connor (played by Alison King since 2006), who’s had a lot of trauma – her husband’s death in a car crash, rape, kidney failure, psychosis – and become one of the most compelling characters.

‘Carla is all of these.’ Her current love is Peter (above right, with Carla) – an alcoholic bigamist. 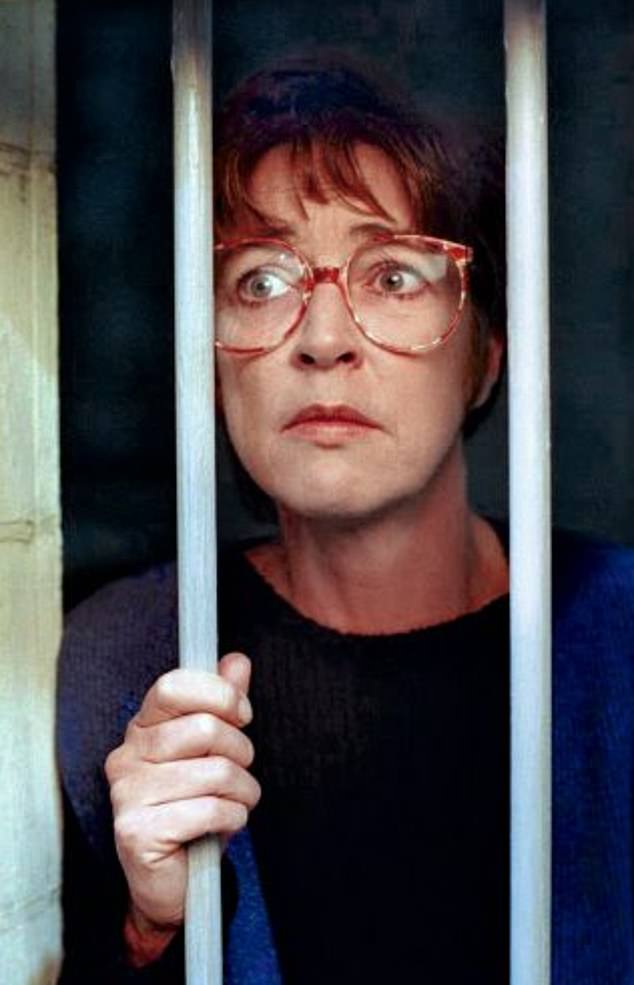 Deirdre Rachid (Anne Kirkbride) fell for ‘pilot’ Jon Lindsay at a singles night in 1997 and they got engaged.

But, in fact, Jon worked in the airport tie shop and was still living with his wife.

He’d also committed mortgage and credit card fraud but implicated Deirdre in the crimes, and she was jailed (left) for 18 months.

Corrie fans were aghast, launching a campaign to ‘Free the Weatherfield One’, but Deirdre was released only after Jon was shown to already be a bigamist. 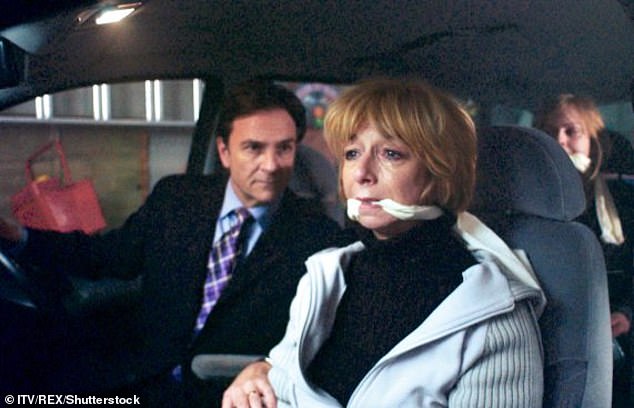 In 2003 villain Richard Hillman (Brian Capron) kidnapped estranged wife Gail (Helen Worth) and her children and tied them up in his car.

He then drove at high speed before plunging the car into the canal, screaming, ‘I love you!’ Gail and the family were dragged to safety, but Hillman (right, with Gail) drowned.

Helen actually had to learn to swim for the scene. ‘I couldn’t swim, so it was quite hard for me. I had to learn for a few weeks – and I’ve never done it since!’ 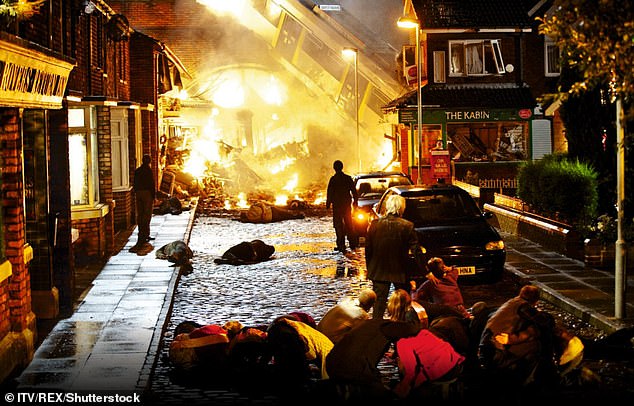 Two main characters were killed when a tram crashed off the viaduct at the end of the street in 2010 (pictured).

But in 1967 a train had tumbled from the same viaduct, and legendary busybody Ena Sharples (inset) was knocked unconscious – but she made a rapid recovery.

As Elsie Tanner commented, ‘If that woman fell off Blackpool Tower, she’d bounce.’ 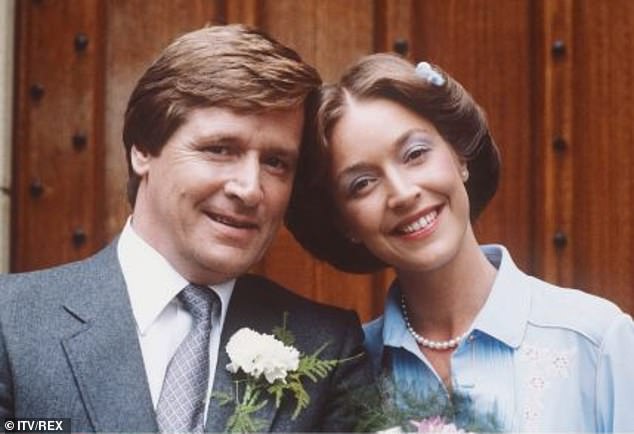 Although having many relationships in his 60 years in the show, Ken Barlow (left) is most commonly associated with Deirdre (right) who he first married in 1981

Ken Barlow (William Roache) has had many relationships in his 60 years on the Street but he’ll be forever linked with Deirdre.

Their first nuptials in 1981 (right) coincided with the wedding of the Prince and Princess of Wales – and their second, in 2005, came just a day before Prince Charles married Camilla Parker Bowles.

Although Ken and Deirdre both had affairs when married to each other, their love endured, and Ken was lost when Deirdre passed away in 2015 after the death, aged 60, of actress Anne Kirkbride.

Game for a giggle 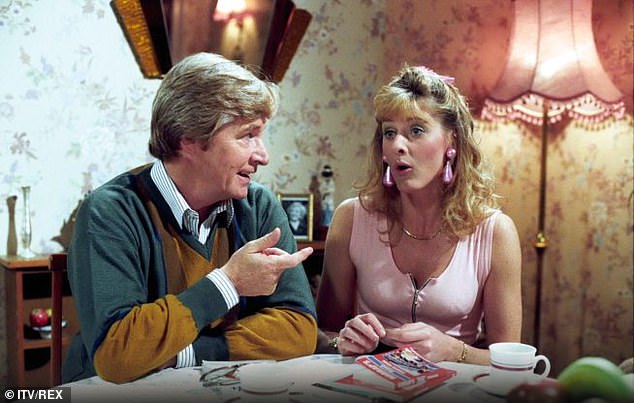 Naive Rovers barmaid Raquel Wolstenhulme (Sarah Lancashire) always wanted to better herself. To impress a date, she asked Ken to give her French lessons (above) in 1993.

Raquel revealed a French man in Corfu had once taught her to say ‘Isn’t it a lovely day today’. Ken was surprised when Raquel innocently went on to proposition him in French.

Funnily, Raquel ended up married to a Frenchman and raising her daughter in a French chateau.

‘One time we worked with a tarantula. The first spider they got was a Mexican bird-eating spider, its body was the size of two fists.

‘Roy said, “That’s no spider. It’s a lobster!” So they got a smaller one. We were scared but laughed a lot.’ 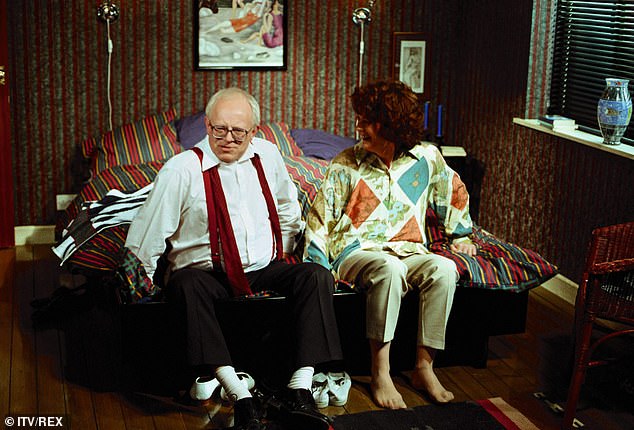 Reg Holdsworth (Ken Morley) got a water bed for his flat above The Kabin to impress Maureen Naylor (Sherrie Hewson).

But Derek Wilton (Peter Baldwin) was fixing a light down below with a drill and unknowingly punctured the bed.

When water started dripping down, he worried Reg’s bath was overflowing so he barged in – to find a naked and panicking Reg and Maureen. 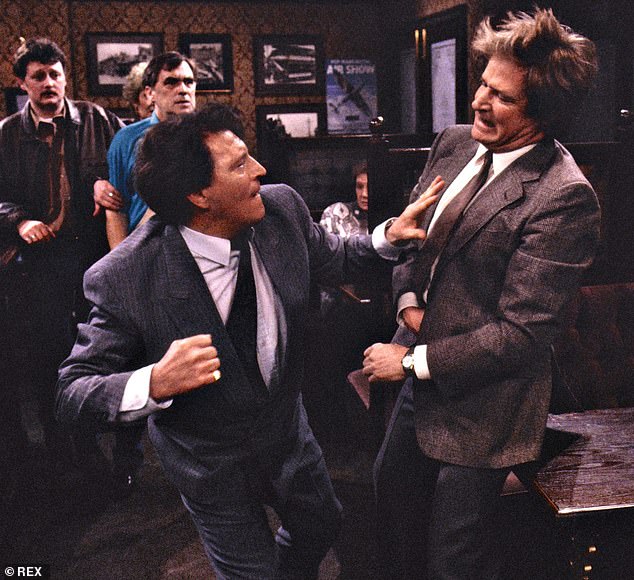 Often their fistfights (right) were over women, such as Mike’s affair with Ken’s wife Deirdre and Ken dating Mike’s ex Alma, who was won back by Mike.

But their relationship ended poignantly when Mike died in Ken’s arms on the cobbles after a heart attack.

These elderly widows (played by Violet Carson, Margot Bryant and Lynne Carol) would sit round that small table in the Rovers snug, gossiping, in the early years.

When Martha died of a heart attack in the snug in 1964, Ena was heartbroken – and so were millions of viewers.

Son Terry was a rogue, but Tyrone Dobbs (Alan Halsall) later became like a son after he began lodging with them. 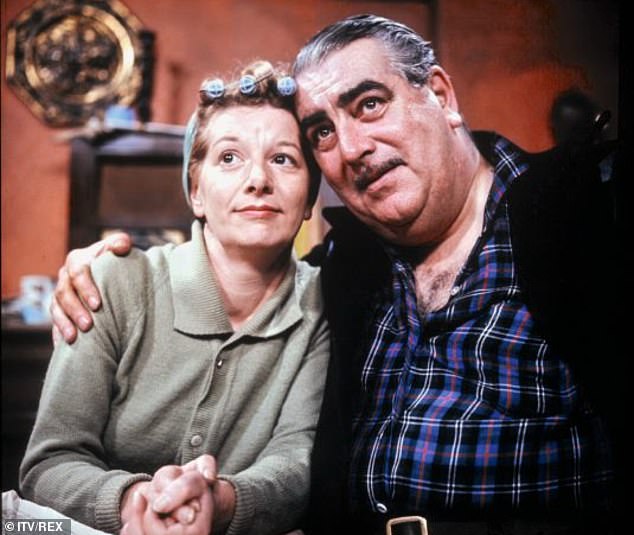 But heartrending scenes after his death in 1984 showed Hilda’s love for him, as she sat by his grave to say she’d never remarry.